Initial investigations show that part of the building already existed around the sixteenth century and the discoveries made during the restoration work are proof if this. The palace, built on old walls, is a beautiful building, later enlarged with renovations and reconstructions. It has a U-plan eighteenth-century shape, with the wings facing south and two floors.

The portal, in ashlar stone, dates back to 1791 and opens onto an atrium formed by six columns supporting cross vaults. The courtyard is enclosed by the wings of the building which are also composed, like the facade, of pebbles and stones.

The ground floor of the left side leads to the cellar, whose vault is built of stone and has a double wall on the east side. This room was completely filled with earth and was discovered thanks to the expertise of the architect in charge. A vaulted stone oven was found in this room which is presumed to be used for baking bread. In the right wing of the ground floor, however, there are rooms with walls decorated with period paintings now retouched and restored to their original beauty.

A magnificent ivory marble staircase leads to the first floor, now home to the various municipal offices. Among these, the ceiling of the technical office in wooden beams and iron rods is remarkable. 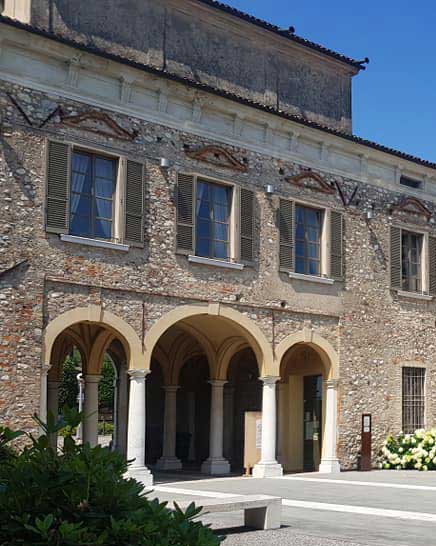