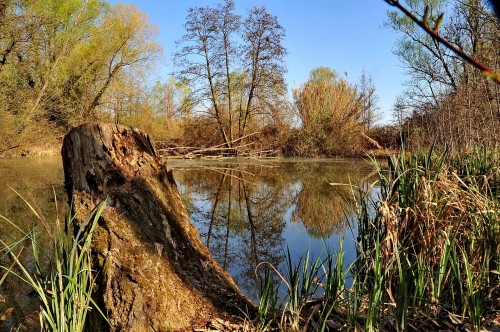 The naturalistic and sporting route starts from the center of Padenghe and can be covered both on foot and by bicycle...

The naturalistic and sporting route starts from the center of Padenghe and can be covered both on foot and by bicycle.

The Balosse naturalistic itinerary extends for about 3,500 m in an urban and rural environment. Notable areas are the Rio Balosse basin with hygrophilous botanical species, an alder grove, orchids and rare plant species, the wetland of the Rio and the fields of the Posserlè area. The route includes educational information boards on flora, fauna and the environment.

On the way back, take a break and enjoy a snack or an aperitif in the many bars in the center, not far from the Via Verdi car park. Park your car in the large free car park on Via Verdi, head towards the center along via Barbieri and then, passing the parish church of Santa Maria Assunta, turn right onto via Posserlè. At the intersection, turn left and at the roundabout turn right onto via Bertanigra. Turn right and follow path 1C: following the signs you will soon reach the Balosse wetland.

In the small town of Padenghe lie real architectural, cultural and landscape gems that can be discovered during this journey...

In the small town of Padenghe lie real architectural, cultural and landscape gems that can be discovered during this journey.

Departure from the large free parking in via Verdi. Heading towards the center, on the right stands the magnificent Palazzo Barbieri, whose origins date back to the 16th century. The palace, built on old walls, is a beautiful building, later enlarged with renovations and reconstructions. It has a U-plan eighteenth-century shape, with the wings facing south and two floors, with a recently renovated internal courtyard. The building is now the seat of the various municipal offices.

A few steps from the town hall is the Parish Church of Santa Maria Assunta. Inside, its eight altars dedicated to St. Mary, the Madonna, the patron saints and the altar of relics are noteworthy.

The center of Padenghe is very lively and full of shops, grocery shops and bars, the perfect place for a refreshment break before going up to the castle. Continuing on via Chiesa and on via Gramsci, the climb begins towards the castle and the most evocative viewpoint in the area.A panoramic terrace with parking opens on the left. There you can enjoy a spectacular view of the Lower Garda, the ideal point to take some pictures.

The Castle can be reached via the 3 pedestrian paths indicated or by turning right at the votive niche in via Monte and then right again on Via Castello. Located in a splendid panoramic position, the castle, dating back to the year 1000 and considered the oldest in Valtenesi, has almost entirely preserved its original structure. You can admire the three towers, the largest of which, over 21 meters high (open for free during opening hours from 9 AM to 6 PM), is located above the entrance, where the slits of the drawbridge are still visible. Entrance to the castle and to the small open-air theater is free. Continue the route returning towards Via Monte and taking the uphill path towards the hamlet of Pratello. The suggestive hamlet of Pratello hosts the small church of the Visitation of the Blessed Virgin Mary. Construction began in 1720 and the entire population collaborated. The church has a single room with a barrel vault and is very pleasant inside.

Proceed along via Levrini and relax in the greenery of via Pralongo and via Fienile, at the end of which, between an avenue of cypresses among the oldest in Europe, stands the Sanctuary of the Madonna della Torricella on the road that leads from Padenghe to Soiano.

From the Sanctuary the path ends on via Metelli which leads back to the town center. 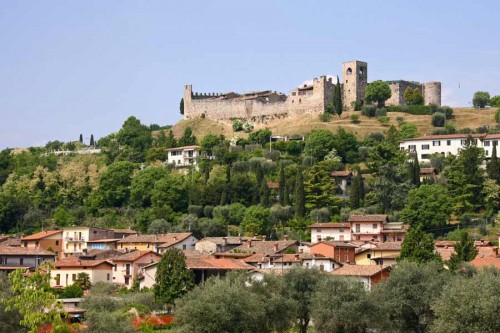 The first stop on the route is the spectacular Sant’Emiliano hermitage. The closest free parking is at the panoramic terrace of Via Gramsci, next to the kiosk.

The first stop on the route is the spectacular Sant’Emiliano hermitage. The closest free parking is at the panoramic terrace of Via Gramsci, next to the kiosk. Proceed on via Gramsci towards Lonato and turn left on via S. Emiliano and follow it up to the small church which stands on a morainic promontori. There you can enjoy a breathtaking view of the southern part of the lake. The church is a small religious building from the Romanesque period which lost its importance in the 16th century when the new parish church was built in the center of the town. The decline continued, until the final abandonment and desecration of the temple. In the 1950s the restored church found its ancient Romanesque structures, appreciated above all for the homogeneity and compactness of the architectural apparatus.

After stopping at the hermitage, continue the route descending towards the town and crossing the district of Villa, first again on Via Gramsci and then turning right into Via Ramazzini up to Via Roma, where the Church of the Disciplina stands, a little Church dedicated to the Madonna della Neve. Inside you can admire an interesting painting of the Beheading of San Giovanni Battista del Malosso. In a reliquary there is a very pretty porcelain Maria Child.

Go along via Roma and via Fratelli Beretta to the intersection and turn right. After the kiosk enter the green and luxuriant Vaso Rì park, following the indications of the municipal route, cross it completely. In the park there are wooden tables and benches, perfect for a picnic.

Continuing along the route on the Vicinale Maino and Calcinato road, then straight again on via Maguzzano, you reach the magnificent Benedictine abbey of Maguzzano, in the territory of the Municipality of Lonato. The abbey was founded by the Benedictine monks in the 9th century on a complex built in the Lombard period. After several destructions, it was rebuilt. It currently hosts a community of the Poor Servants of Divine Providence of Don Calabria.

Additional guides and information material available in the office.

Attractions in the surroundings